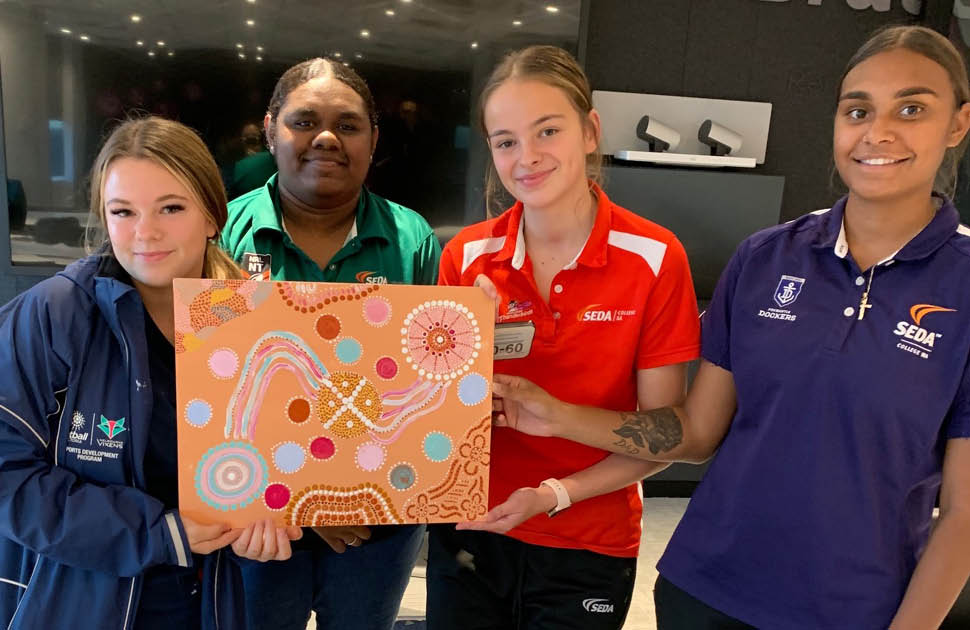 Meet Riley, Gloriana, Codie and Alesha, they are the passionate SEDA College ambassadors behind our scholarship fundraising initiative.

Being current students at the college themselves, they know the difference that an education at SEDA College has made to their lives and are invested in expanding the scholarship program so that more Indigenous youth like themselves can attend. We had the opportunity to interview all four of them when they came together from around Australia, to co-create the artwork that is featured on the ‘Our Journey’ Tote bag available with donations of $20.

Let’s meet them, learn a bit about their background and what they are aspiring to do when they finish school.

“Hi, my name’s Alesha. I’m from Perth, WA. My mob is from Northam (dad’s side) and my mum’s side is from Boddington. I’m a Year 12 at SEDA College. When I finish school, hopefully, I want to make it or get drafted to AFL Women’s and if that doesn’t work out, I guess, PE teaching. Give that a go and from there just see where I’ll go. Wherever my feet go, I go.”

“My name’s Gloriana, I’m from Darwin. My mob is from the Torres Strait. I’m in Year 12 at SEDA. I really want to make it to the NRLW actually, but if that doesn’t work, I want to do mechanics and stuff like mining works, driving big trucks.”

“My name is Riley. My mob is Gunditjmara. I live up north of Melbourne and I go to SEDA. We get to learn a lot about sport, not only is it just the players and umpires, it’s the marketing, the game development, organising umpires, organising tournaments, things like that. There’s a lot behind it to what you actually think there is. So, it’s definitely opened my eyes a lot about sport in itself, not just netball.”

“I’m Codi. I’m from Narangga Wirangu, Point Pierce in Streaky Bay area. I go to SEDA College SA, I’m part of the netball program there in Year 12. I want to study law, hopefully. That is definitely something that I want to do, I’ve been exposed to a lot of aboriginal people in the justice system at a young age, so I’ve seen how unjust that justice system can be.”

Every $5,000 raised provides a fully funded position at SEDA College for an Indigenous student.

Tote bags are available from the Concierge Desk on Ground Floor as a gift with a donation of $20. Visit today and donate to support this worthy cause.

This initiative is in partnership with SEDA Group and Bridging the Gap Foundation.